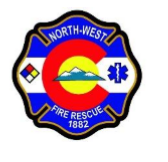 North-West Fire Protection District protects an area of 184,970.35 acres or 289.02 square miles at an elevation of 9,500 feet and above that includes two communities, Fairplay, Colorado and Alma, Colorado, which we believe is the highest operational fire station in North America. Park County has numbered the fire districts, and North-West Fire is located in District 4.

The district experiences a 100 percent increase in population during the summer months due to second home population and events that are held within our district. Pike National Forest has some land included in our district as well. There are several large subdivisions with Wildland Urban Interface risks that adjoin the forest boundaries. There are two major highways that run through the district, including U.S. Highway 285 which is a designated military route.

Scroll back to top